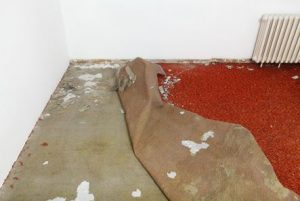 If you’re like most people, you don’t replace your carpeting that often. Generally, carpets are meant to last five to fifteen years, though plenty of people keep them long after that. Eventually, though, there comes a time when it’s “just time” to get new carpeting. What are some signs you need a new carpet?

Indicators You Need a New Carpet

First, if there’s a part of your carpet that gets tons of heavy foot traffic over the years, such as in the hallways to the bedrooms, the matting below is likely going to wear down. When it does, you’ll need new matting below the carpet, so this is also the time when you’d go ahead and get new carpeting, too. Chances are the actual carpet is “worn down” after years of being heavily trafficked. The same can be said for the carpet padding. When it gets wrinkled, lies unevenly, or starts to make odd sounds when you walk on it, it’s best to replace the padding and carpet.

Next, consider carpet stains. Oftentimes when people buy a home with carpets one of the first things they’ll do is replace them. Why? Perhaps it’s that they want to change the color of the carpeting to more reflect their taste. Or, more likely, it’s because the previous owner spilled all sorts of things on the carpeting, leaving ugly stains. This is especially true for white or beige rugs which tend to show stains in a glaring fashion. Even after stains are treated, some remnant may be left that just doesn’t look appealing.

Thirdly, carpets can get bacteria-laden, moldy and smelly, especially if there’s a dog or cat in the home. Their urine soaks into the carpet and that’s, as you’d imagine, not a pleasant or good thing! Then, of course, there’s vomit from pets or kids. And what about rooms that are flooded? Wet carpets are typically thrown out and replaced so mold doesn’t take hold.

Finally, what’s in fashion? If you still have a shag carpet from the 1970s, and you want a more modern look and feel, it’s time to get new carpeting. Many people like to replace old carpets with new ones simply for aesthetic reasons. There is something “fresh” about new carpeting that reinvigorates the look of a place.

If replacing the carpeting in your home seems too expensive for you right now, but you would like to have some repairs made and/or have the carpets cleaned, then contact Horizon Carpet Upholstery Tile & Grout Cleaners. Serving the Phoenix region, you can call 602-404-8064 or 623-561-6277 for more information.

Discover why Horizon Carpet and Tile Cleaners and Repair is becoming the most preferred cleaning company in Phoenix, AZ.